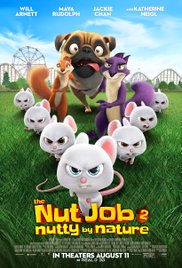 Not recommended under 7; parental guidance recommended 7-9 due to violence and scary scenes

The Nut Job 2 is an animated movie in which Surly (voice of Will Arnett), a squirrel, leads a group of forest animals who have been living the life of luxury in a derelict nut shop. The animals have become lazy and fat and Andie (Katherine Heigl) tries to make a difference by teaching the young squirrels to forage for their food. They are reluctant to learn, however, as food is easily come by in the nut shop. This all changes one day when the nut shop explodes and the animals have to learn how find food in the park. This option is then threatened when the Mayor of Oakton (Bobby Moynihan) decides to turn the park into an amusement park, mainly to please his spoilt daughter Heather (Isabella Moner). The animals are trapped by animal controllers and forced out of the park.

The animals decide to fight for their park and much mayhem ensues when they attack the amusement park to win back their territory.

There is a lot of violence and accidental harm in this movie, mostly done for laughs. Some examples include:

Nothing of concern, although there is likely to be associated merchandise.

There is some coarse language in this movie, including name calling such as ‘moron’ and ‘ignorant layabouts’.

The Nut Job 2: Nutty by nature is an animated comic movie which has some quite dark humour in it. It is also action packed and quite intense and scary for younger viewers. It is not recommended for children under seven but will probably be enjoyed by older children.

The main messages from this movie are that ‘individually we might be tiny but together we are giants’ and that nothing in life is free – we have to work to live.

Parents may wish to discuss Heather’s character as a good example of how not to behave.