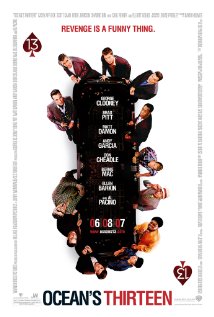 Not recommended under 12, PG to 14 (Violence, sex, themes and language)

Reuben Tishkoff (Elliot Gould), friend and mentor to Danny Ocean (George Clooney) suffers a heart attack after being double-crossed by Las Vegas casino boss Willy Banks (Al Pacino). Ocean and his right-hand man Rusty Ryan (Brad Pitt) decide to reassemble the old team and wreak revenge by financially ruining Banks on his casinos opening night.
Each of the members of Ocean’s Thirteen has his own part to play in the financial destruction of Banks and his casino, and each of these parts provides a thread in the film’s plot. Basher Tarr (Don Cheadle) operates a tunnelling drill used to simulate an earthquake, which in turn will disable Banks’s state of the art security system. To fix the playing dice used in Banks’s casino, two brothers, Virgil and Turk (Casey Affleck and Scott Caan) infiltrate a plastics factor in Mexico enabling them to tamper with the production of the dice. As a subplot, Virgil and Turk incite a labour dispute and riot. Saul Bloom (Carl Reiner) dons a disguise and personates an English hotel reviewer who is reviewing Banks’s hotel/casino for the prestigious Five Diamonds Hotel Award. Livingston Dell (Eddie Jemison) infiltrates Bank’s casino as a Blackjack dealer. Linus Caldwell (Matt Damon), poses as the assistant of Yen (Shaobo Qin), a wealthy gambler, the altermate goal of this plot being to get Linus closer to Bank’s personal assistant Abigail Sponder (Ellen Barkin). When the tunnelling drill breaks down, Danny Ocean is forced to seek financial assistance from old rival Terry Benedict (Andy Garcia), who also happens to be the victim/bad guy from the first Ocean’s Eleven film.
By the time opening night comes around, Saul has totally destroyed any chance of Bank’s winning the famed Five Diamonds Hotel Award. Then at the appointed time, all of Danny Ocean’s scams, plots and sub-plots simultaneously fall into place and the film reaches its exciting climax.

In addition to the above-mentioned violence, there are scenes which may disturb children in this age group, including

Children in this age group may also be disturbed by the above mentioned violence and disturbing scenes.

Children in this age group may also be disturbed by the above mentioned violence and disturbing scenes.

Ocean’s Thirteen is a comedy crime thriller about a group of criminals who band together to seek justice and revenge for one of their own. The film targets older adolescent and adults, particularly those who are fans of the film’s stars and enjoyed the previous film in the series.

Parents may wish to discuss some attitudes and behaviours, and their real-life consequences, such as: