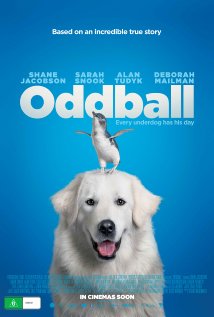 Parental guidance recommended under 6 due to possibly scary scenes

Oddball is a feature film based upon the true story of Alan ‘Swampy’ Marsh (Shane Jacobson), an eccentric Victorian chicken farmer who struggled to protect a penguin colony on Middle Island. After several years of the colony residing on the island, wild foxes began to notice their presence and started swimming over to kill them. As a result, their population had been reduced to almost nothing, with only ten penguins left.

Swampy, who takes a keen interest in protecting the penguins, proposes that Italian sheepdogs or maremmas should be used to guard the penguins. He is supported wholeheartedly by his daughter Emily (Sarah Snook), a wildlife officer for the penguin sanctuary and his granddaughter Olivia (Coco Jack Gillies). Emily is trying to juggle her concern for the penguins, her role as a single mother of a young girl, and a new relationship which could take her away from Australia.

Over the course of the film, Swampy and his family overcome the many obstacles they face in protecting the small animals.

There is limited violence and some accidental harm in the film, including:

Children in this age group may be scared by some of the scenes described above.

Emily is managing a new relationship with a man – it is a romantic relationship, but no sexual content is shown or discussed.

There is no coarse language, but there are fart jokes where the dog makes an audible sound and people discuss how terrible the smell is.

Oddball is an entertaining and inspiring film, based on a true story which is likely to be enjoyed by audiences of all ages, particularly those aged 8 and over. The movie follows Swampy as he defies the odds, and teaches his maremma dog Oddball how to protect a small colony of penguins. With no one else in the community having faith in Swampy or his canine friend, Swampy is forced to go it alone. The film highlights his strength and determination, his unflinching belief in Oddball, and the intelligence of the dog. It also demonstrates the value of unconditional family support and love.

There are some scenes of accidental harm, Oddball is captured by the dog ranger, and some children may be concerned at the idea of penguins being killed, so parental guidance is recommended under 6.

Parents may also wish to discuss wildlife extinction, and why and how animals should be saved.