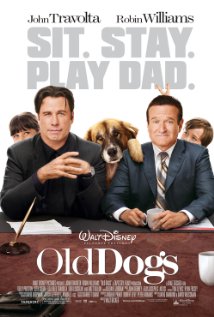 Lacks interest and not recommended under 8; parental guidance to 10 (themes and violence)

Dan (Robin Williams) is a successful business man on the cusp of a multi-million dollar business deal when he receives a phone call from Vicki (Kelly Preston), a woman he married for one night seven years before during a hazy night out with his best mate and business partner, Charlie (John Travolta).  Vicki shares news of the 7 year old twins Dan fathered from that night and encourages him to meet the twins, Emily (Ella Bleu Travolta) and Zac (Connor Rayburn).

The story becomes complicated when Vicki has to go to jail for two weeks on a peaceful protesting charge and her babysitter is injured.  Dan and Charlie step in to look after the children for the two weeks, Dan as the overprotective and anxious new dad and Charlie as the irresponsible but sensitive uncle. This is a recipe for silly adventures and humorous incidents as Dan learns about the ups and downs of being a dad.

Children with a parent in jail; children separated from their mother and left with someone they hardly know; death of a beloved dog

There is frequent comedic violence and accidental harm in this movie including:

In addition to the above mentioned violent and disturbing scenes, there are some scenes in this movie that could disturb children aged eight to thirteen, including the following:

Old Dogs is a comedy about family commitment.

The main messages from this movie are the importance of family, honesty, and friendship.