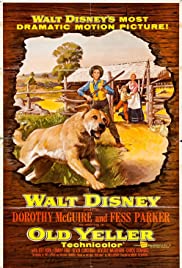 Not suitable under 7; parental guidance to 9 (scary scenes and sad themes of death and loss)

Texas, in the late 1860s: Katie (Dorothy McGuire) and Jim Coates (Fess Parker) run a family farm with their sons Travis (Tommy Kirk) and Arliss (Kevin Corcoran). When Jim has to travel to Kansas to trade cattle, during his absence, 15 year-old Travis adopts the role of ‘the man in the house’, working the cornfield, hunting, and managing other chores around the farm. One day while working the field, Travis encounters a cheeky stray dog, whom he spontaneously names, "Old Yeller". While Travis initially does not trust Old Yeller, his younger brother Arliss, who is yearning for a pet dog, convinces Travis and Katie that he might be a useful cattle and watch dog. Indeed, before long, Old Yeller proves himself worthy, and even saves both Arliss' and Travis' lives on numerous occasions. But just when the family cannot imagine life without Old Yeller anymore, he is attacked by a rabid wolf and the family are confronted with a heart-breaking decision.

Old Yeller is an award-winning Disney Classic packed with valuable and important life lessons. It gives a fascinating insight into the life of American settlers and their everyday and family lives. The story does not shy away from portraying the sad, dark, and scary sides of life but uses the opportunity to deliver messages of how to overcome and grow from those challenges. Some parts of the story and scenes are likely too intense for a young audience, and parental guidance is recommended due to some scary and very sad scenes, and to put the story and events into historical context.

The main messages from this movie are that unfortunately life does not spare us sad, scary, and challenging moments, but when we are confronted with those, it is important to take away useful lessons, to grow, and to remind ourselves of the many positives. Despite the incredible sadness of Travis having to put down his beloved dog, the film compensates the viewer with the many positive role models and important messages, and ends on a positive and hopeful note.

This movie could also give parents the opportunity to discuss with their children the importance of understanding how times, society, culture, and family lives are ever-changing. Parents can discuss with their children in what ways children grew up differently back then, what kind of responsibilities and challenges children and parents were facing then compared to today, and which values remain stable throughout time.