On a Clear Day 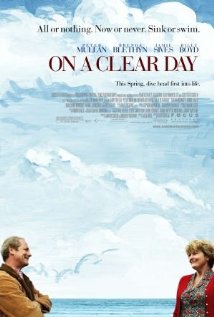 Frank (Peter Mullan) has worked at a Glasgow ship yard for the past 35 years and now at 55 finds himself redundant. Feeling desperate as to what to do with his life, he starts to look for a new direction. A casual remark from friend Danny (Billy Boyd) that ‘on a clear day he could swim to France’ sets Frank on a course to swim the English Channel. He starts swimming seriously but keeps his plans from his family, loving wife Joan (Brenda Blethyn) and son Rob (Jamie Sives).

Rob is a stay at home dad who lovingly and over protectively looks after his twin sons. Rob, himself a twin, lost his brother to a drowning accident when young. Father and son both hold on to guilt about the event which causes tension between the two and an inability to have a proper relationship.

While practising at his local pool, Frank is impressed by disabled youngsters who come to the pool and overcome great difficulty to proudly swim the width of the pool. This gives Frank much courage to continue with his goal of swimming the Channel, as do his old work mates who are very supportive of him. When the time comes for Frank to swim the Channel, he overcomes much more than physical exhaustion and manages to put behind him the past which has restrained him for so long.

Death of a child, disability

There is one violent scene in which Rob confronts his father in the pool and they have a fight.

In addition to the above-mentioned violent scene, there are some scenes in this movie that could scare or disturb children under the age of five, including the following:

Children aged eight to thirteen could still be disturbed by the above mentioned scenes.

Children over the age of thirteen probably wouldn’t be scared but could still be upset by the young boy drowning.

No actual nudity but several scenes of men undressing in change rooms, showering and one man losing his trousers.

Quite a bit of beer drinking, at home and the pub.

There several instances of coarse language in this movie, including:

On a Clear Day is a. humorous yet poignant film that would appeal to many adolescents and adults. In looking for a new direction for his life, Frank overcomes personal demons that have always haunted the relationship between himself and his son. The main message from this movie is one of overcoming adversity and endurance.

This movie could also give parents the opportunity to discuss with their children the importance of being able to discuss problems with others and not keep them bottled up.