One and Only Ivan, The 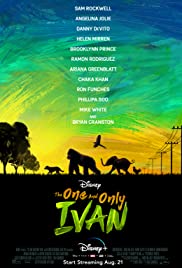 Not suitable under 5; parental guidance to 7 (sad/emotionally intense themes and scenes)

Ivan, a Silverback Gorilla (voiced by Sam Rockwell), is the headlining star of a circus show that has been running inside a shopping mall for many years. Day in, day out, "The One and Only Ivan" plays his act, along with his fellow performers: elephant Stella (voiced by Angelina Jolie), poodle Snickers (voiced by Helen Mirren), chicken Henrietta (Chaka Khan), seal Frankie (Mike White), and rabbit Murphy (Ron Funches). Audience numbers are dwindling, however, and ringmaster Mack (Bryan Cranston), is in desperate need for a new act, so he recruits baby elephant Ruby (voiced by Brooklynn Prince). Naturally, Stella takes Ruby under her wing. Ruby turns out to be a popular attraction and becomes the new headliner. Pushed to the sideline, Ivan reflects over his purpose in life as a circus animal. He also picks up a new pastime: drawing – after the custodian's daughter Julia (Ariana Greenblatt) gave him some paper and crayons. Not long after, Ivan's life takes another challenging turn; when his old and wise friend Stella senses that she is dying and makes Ivan promise to look after little Ruby, and to make sure that she will be free. With the help of their stray dog friend Bob (Danny de Vito), Ivan and the others attempt a prison break but their taste of freedom does not last long and they are returned to their cages. But now, Ivan is more desperate and determined than ever to reconnect with his wild roots and keep his promise he gave to Stella – to make sure that Ruby can grow up in freedom.

The One and Only Ivan is an adaptation of Katherine Applegate's award-winning 2013 novel of the same title, which is based on the true story of silverback gorilla Ivan. Ivan was indeed snatched from the wild in the Democratic Republic of Congo, raised in America, and was a circus animal for 27 years, before he came to the attention of animal welfare campaigners, and was finally transferred to Zoo Atlanta. It is also true that Ivan got fame for his drawings.

By making the animals talk, Disney gives the audience an endearing, funny, and inspiring insight into the minds of the animals. Compared to the book, the film has reduced the portrayal of physical cruelty against the animals, even though the viewer gets a good sense of how the animals suffer from living a life in captivity, restricted to a small cage and stage. Even though disrupted by cheerful Bob's funny comments and actions, the film has a rather sad and thought-provoking undertone, and there are a lot sad and emotionally distressing scenes and themes, which might upset young or sensitive viewers. Unlike many modern films, The One and Only Ivan also takes its time, and young or impatient viewers might find the slowed pace challenging. Nevertheless, or maybe exactly because of these aspects, while the film is unsuitable for children under 5 and parental guidance is recommended for viewers under 8, The One and Only Ivan is a great pick for families who are looking for an inspiring family film that contains many important messages and positive role models.

The main messages from this movie are that it is important to fight for your dreams, that you achieve more with the help of good friends, and that it is important and sometimes difficult to see a situation from the other person's perspective. This dilemma is illustrated through the depiction of Mack: It is obvious that he cares deeply for his animals and does not want to lose them, but at the same time it is clear the animals would be better off in a more appropriate environment. The viewer will very likely be torn between feeling sorry for the animals, but also sympathetic for Mack.