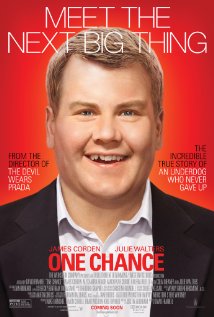 One Chance tells the story of Paul Potts (James Corden), the first ever winner of reality television show Britain’s Got Talent.  As a child Paul, was overweight and unpopular with his peers. Often a victim of bullying, he escaped from this reality through his singing talents.  As he grew older he developed his passion for singing opera, a talent which his mother (Julie Walters) encouraged but his father (Colm Meaney) despised.

Paul is lost as a young adult, torn by the decision whether to find a sensible job or reach for his operatic dreams. He meets his one and only love Julie-Ann (Alexandra Roach), but despite her love and encouragement behind him Paul still finds that his life is fraught with many challenges and begin to lose faith in himself and his talent.  It’s not until a once in a lifetime opportunity arises that Paul decides to throw caution to the wind and give his talent one last chance.

Children in this age group are also likely to be disturbed by tha above-mentioned scenes and by a reference to the negative relationship between Paul and his father.  Whilst it is fairly mild and refers to his father not being supportive of him singing opera, some kids who are sensitive to this dynamic may find it upsetting that his father does not support and stand up  for his son.

Children in this age group may also be disturbed by Paul’s relationship with his father and by the way in which Paul is bullied.

One Chance is the story of Paul Potts, the winner of a popular British talent show.  It tells the story of Paul’s difficult childhood and how his life was turned around after being given one more chance to shine. It is not recommended for children under 14. It lacks interest for young children and contains  themes (particularly bullying), scenes of violence, sexual references and coarse language which make it unsuitable for this age group. Parental guidance is recommended to 15

The main messages from this movie are about love and its challenges.