One Direction: Where we are 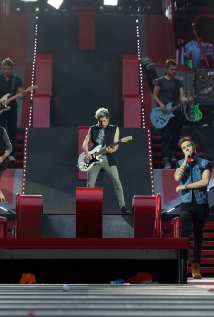 One Direction: Where we are is a film that follows the famous boy-band One Direction as they tour Italy. The concert and performance-based aspects of the film take place at the iconic San Siro Stadium in Milan. However, the film is also intercut with additional behind-the-scenes footage and interviews with the five band members. Where We Are contains musical numbers sung by the band, as well as wide panning shots of the audience. At several points throughout the film, we see screaming and crying female fans in the audience who are singing along to One Direction’s song lyrics. During the interviews, the members of One Direction talk directly to the camera and address the film viewers themselves – this is used to create an impression of being at the concert as well, via the medium of the film.

There is limited product placement in the film, apart from the obvious promotion of the band itself

There are limited sexual references, including:

One Direction: Where we are is a film that follows the five young male band members on tour. Although it is predominantly comprised of concert footage with the band in performance, the film encourages the notion that dreams can come true. It highlights the need for believing in oneself, the need to rely on friends for support in times of both hardship and success, and clarifies the level of determination and ambition that can sometimes be required in order to succeed within certain environments.