One Hundred and One Dalmatians (1961) 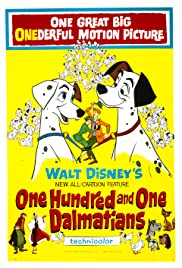 Spring is in the air and Pongo (voiced by Rod Taylor), a handsome Dalmatian, has had enough of leading a boring and lonely bachelor's life! When he spots a gorgeous female Dalmatian called Perdita (voiced by Cate Bauer), along with her beautiful owner Anita (voiced by Lisa Davis), he takes matters into his own paws to make sure that he and his owner, Roger (voiced by Ben Wright), get the attractive pair's attention. His efforts lead to everyone taking an involuntary plunge in a pond – oops – but it was all worth it because Pongo's dream comes true: Roger and Anita fall in love and get married, and a few months later, Pongo and Perdita are exhilarated at the arrival of 15 adorable puppies. Everything could be perfect if it wasn't for Anita's vicious old school friend, Cruella de Vil (voiced by Betty Lou Gerson) who – for mysterious reasons – insists on buying the entire litter of puppies. Roger, who does not trust Cruella, refuses to sell the puppies to her, much to everyone's relief. Ruthless Cruella does not take no for an answer, however, and sends her two henchmen Horace and Jasper to dognap the puppies – with terrible intentions: She wants to use their fur to make a Dalmatian fur coat! When the police have no success in locating the puppies, Pongo and Perdita decide to use the "Twilight Bark" – activating the entire animal network in and around London to find and save their babies.

There is some inferred and depicted violence in this movie including:

One Hundred and One Dalmatians is one of Disney's animated classics from 1961. Nearly 60 years after the film's first release, its four-legged heroes are as adorable and their adventures as captivating as ever. There is also a fair amount of tongue-in-cheek humour which will provide for fun family entertainment. Frequent references to animal cruelty, slapstick / comedy violence, and one of Disney's scariest and most iconic villains makes this film unsuitable for children under 4 and warrants parental guidance for children aged 4-5 and/or a sensitive audience.

The main messages from this movie are that sometimes in life it is important to take initiative, and that you can achieve more as part of a team and together with friends.