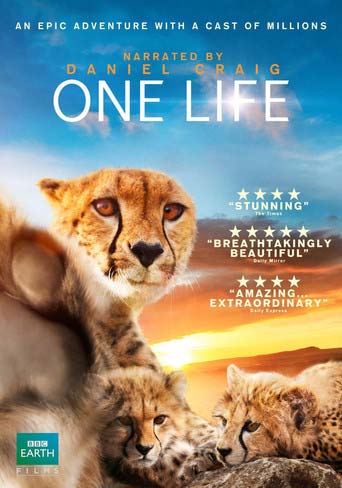 Not recommended under 8, PG to 10 (Predatory animal behaviour)

One Life is a beautifully filmed documentary about the lives of animals, plants and insects with which we share the planet. This cinema release is part of a BBC Television documentary series narrated by Daniel Craig.

The close up photography of the most intimate aspects of plant and animal life is quite spectacular and is filmed in many diverse places on the Earth. We see a tribe of Snow monkeys in a thermal pool in Japan’s freezing winter attacking any others who dare to enter.  A baby elephant has to walk a very long way with its mother to a water hole and nearly dies along the way after getting stuck in the mud. The mating rites of a small red beetle are quite amazing to see as the male has to climb all the way to the top of a tree, fighting off suitors along the way.

Predatory animal behaviour; the circle of life; animals in peril

Younger children in this age group could also be disturbed by some of the above mentioned scenes.

One Life is a visually stunning documentary with many close-up shots of animals and insects in their natural environment. This cinema release is part of the BBC Life television documentary series narrated by Daniel Craig. It is well worth seeing, for older children as well as adults. Younger children, particularly under 8s, are likely to be upset by images of animals being killed and eaten by other animals

The main message from this movie is that we only have one Earth and we must share its resources with all of the animals and plants that live on it. The film also shows the interconnectedness between all living things.

This movie could also give parents the opportunity to discuss with their children the importance of animals killing other animals for their food and how humans fit into this food chain.