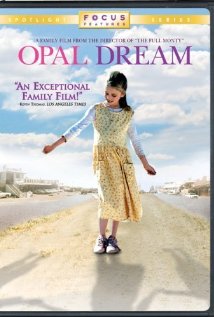 Kellyanne Williamson (Sapphire Boyce) lives in the small outback town of Coober Pedy with her mother Annie (Jacqueline Mackenzie) who works at a local grocery store; her father Rex (Vince Colosimo) who is doing his best to mine opals (but without any success); and an older brother Ashmol (Christian Byers) who is utterly humiliated by his sister’s close association with two imaginary friends Pobby and Dingan.

The above-mentioned violent scenes, could disturb under 5s, in particular the scene in which Rex is threatened with a gun. It is the middle of the night when the gun is thrust in Rex’s face and the children, who are watching the scene unfold, are clearly terrified. The miner with the gun looks angry and evil. The look on the miner’s face, the children’s fear and the intensity of the scene could scare some young viewers.

There are no other scenes in this movie that would upset children of this age, but some of the scenes described above could be scary for some children at the younger end of this age group or for those susceptible to its themes.

There is one scene in which Rex and Annie start passionately kissing in the living room, and are then later it shown in bed, apparently naked, and under a sheet. Rex kisses Annie again before the scene fades into darkness

Opal Dream is a somewhat slow-paced drama based on the book Pobby and Dingan by Ben Rice. It will appeal to fans of the book, lovers of the outback and others who relate to the movie’s theme.

The main messages from this movie are that it is important to have a dream and that when you believe in something it is real, regardless of whether or not other people see what you see.

This movie could also give parents the opportunity to discuss with their children attitudes and behaviours, and their real-life consequences, such as.
taking action based on gossip, without making an effort to ascertain the truth.
accusing someone without proof
using violence as a means to solve problems or seek revenge.