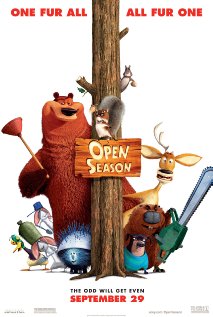 Not recommended under 5, PG to 8 (Viol. Scary scenes)

Boog (voiced by Martin Lawrence), is a loveable grizzly bear who has been hand reared by Beth (Debra Messing) since she rescued him as a cub. He lives an idyllic life and makes regular appearances with Beth on stage at a local wildlife park. However his nice life is challenged when he rescues Elliot (Ashton Kutcher), a young buck, from local hunter Shaw (Gary Sinise). Elliot points out that Boog is a ‘pet’ and needs to learn how to live in the wild. Elliot persuades Boog to leave the comfort of his home and take a trip into town where they break into the local store and totally trash the place. When Beth finds Boog the next day, the policeman tells her it’s time to return him to the wild.

Thus Boog is released into the wild with his sidekick Elliot just in time for open season. Boog has to learn how to fight both the elements and man, his natural enemy.

Sensitive children in this age group could still be scared by the threat and treatment of animals.

Boog and Elliot become business partners and some jokes are made about them being ‘partners’ in the personal relationship sense.

There is some use of the word ‘crap’.

Open Season is not particularly original, but might amuse some older children. The main message of the movie is that animals shouldn’t be hunted.

Parents could talk about the dangers of using violence to counter violence.