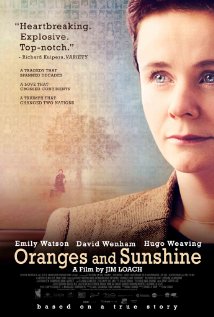 Not suitable under 13, not recommended 13-14 (Disturbing scenes and themes)

Oranges and Sunshine is the true story of Nottingham social worker Margaret Humphreys (Emily Watson) who inadvertently stumbles onto the incredible story of child migrants who were forcibly removed from Britain and taken mainly to Australia, during a period that extended from the end of World War II to the 1970’s.  130,000 disadvantaged children, as young as four, were sent to institutional care in distant countries, often being told that their parents were dead when they weren’t. Parents were also told that their children had died.

Margaret Humphreys faces an uphill battle as she tries to uncover the truth from both the British and Australian governments but is stonewalled. Her life is also threatened on many occasions for raising the issue. These child migrants were promised a life of oranges and sunshine but tragically the institutions that were meant to care for them mistreated them badly. Many, now adults, suffer great trauma from memories of physical and sexual abuse, often at the hands of the Christian Brothers.

In addition to the above mentioned violent scene, there are some scenes in this movie that could disturb children under five, including:

In addition to the above mentioned scenes, there are some scenes in this movie that could disturb children aged five to eight, including:

Oranges and Sunshine is a powerful and moving story with strong characters and some lovely local scenery. The abuse is told as narrative rather than shown but due to its content it is more suited to an adult audience.

The main message from this movie is to keep fighting for truth and justice.

Parents may also wish to discuss what happened to the children involved and the ongoing effects on their lives.