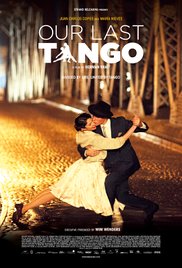 Not recommended under 12 due to themes and lack of interest

Our Last Tango is a documentary telling the story of Maria Nieves, who with her partner Juan Copes, became the most famous tango dancing couple in history. Maria is now 81 but she first met Juan when she was only 14 and immediately fell in love with him. Maria was passionate about, and devoted her life to, tango and to Juan. Juan, who was three years older than Maria, did not always return her devotion. Their relationship was both passionate and tumultuous. Juan admitted to seeing other women but Maria turned a blind eye to this until she discovered that Juan’s latest love was expecting a child. Juan went on to marry Miryam and had another child with her. This was devastating for Maria who had given up her hopes of having children to maintain her dancing relationship with Juan.

They separated for two years during which time Maria met another man but when Juan wanted to rekindle their dancing partnership, she returned to him and to tango. Maria and Juan continued their partnership for another 25 years until Miryam called an end to it.

Maria and Juan, now both in their eighties, come together one more time for their final tango performance.

Maria talks about her impoverished childhood during which her mother would go through rubbish bins to find bones to cook into a stew.

During a difficult time in their relationship, Juan was drinking heavily. Maria says she thinks he ‘sought death’. When asked about this however, Juan says he never contemplated committing suicide.

There is some semi-nudity and sexual activity in this movie, including:

Our Last Tango is a documentary featuring beautifully shot choreography by young tango choreographers and dancers who play Maria and Juan in their youth. These young tango enthusiasts interview Maria and Juan to discover their story and the result is well-crafted into a fluid story of passion and dance. Lovers of tango will enjoy this movie, as will adolescents and adults with a love of dance. Because of the film’s themes, lack of interest for young children and the fact that it is in Spanish with subtitles, it is best suited to viewers aged 12 and over.

The main message from this movie is not to put off having a family for your career. Maria says at the start of the movie that given the chance she would do it all again and wouldn’t change a thing. However, she is lonely at 81 and she advises young women to have children and then continue their careers.