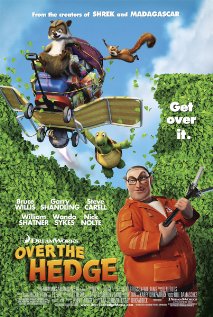 RJ is a racoon who is used to fending for himself, and ‘looks out for number one’. He is really hungry and decides to raid the cave of a hibernating grizzly bear Vincent, who has a large stockpile of everything from cookies to chips. Vincent wakes up as RJ is taking everything and the stash of food is knocked onto the highway below and run over by a car. Vincent is just about to eat RJ but RJ promises to get all the food back and promises to do so within six days.

In the meantime, a gentle group of animals who have just woken up after hibernating. This little group consists of a turtle, skunk, squirrel, hedgehogs and possums. They consider themselves a family. Much to their amazement when they wake up, there is a huge hedge where there used to be forest and on further investigation they find a big suburban development on the other side. This really worries them as they need food for next winter and all the forest has gone.

RJ tricks these animals into getting all the food that he needs so he can pay Vincent back. In doing so, they create so much havoc in the suburban houses that the pest control is called. The animals have to work together, now not only to gather food, but to save their own lives.

There are no scenes that would scare children over the age of eight, though some sensitive children may not like some of the threats to the animals, even though the animals are not real.

There are no scenes that would scare children of this age group.

One mild sexual reference in which the skunk flirts with the cat and talks about getting a good man.

One instance of substance use, in which Squirrel drinks a caffeine drink.

One use of the word ‘butt’.

Apart from the scenes mentioned, most children will enjoy Over the Hedge. Younger children may not understand the story, but will enjoy the antics of the animals; older children and adolescents will enjoy the humour and the story.
The main messages are the importance of family and of being honest.
Values in this movie that parents may wish to reinforce with their children include:

This movie could also give parents the opportunity to discuss with their children the importance of working together as opposed to just looking after yourself, and that deception can have unpleasant consequences.