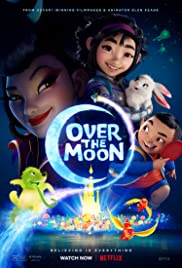 Not suitable under 6; parental guidance to 9 (sad themes (loss of a parent and grief))

Fei Fei (voice of Cathy Ang) lives with her mother (voice of Ruthie Ann Miles) and father (voice of John Cho) in an idyllic Chinese village. They own a bakery and are busy preparing delicious mooncakes for the upcoming moon festival. Fei Fei loves it when her mother tells her the beautiful legend of Chang’e, the moon goddess who took a magic immortality potion and was banished for eternity to live on the moon, leaving her true love Houyi behind. Fei Fei’s mother becomes ill and passes away, leaving her daughter the gift of a soft white rabbit. Jumping several years in the future, Fei Fei is now a young teenager and her father is starting to form a relationship with another woman (voice of Sandra Oh) and her annoying eight-year-old son (voice of Robert G. Chiu). Fei Fei feels deeply hurt, she still misses her mother so much, and tries to think of a way to stop their relationship going further. Using her scientific talents, Fei Fei designs a rocket to take her to the moon. She thinks that if she can prove that the legend of Chang’e is real, then she can convince her father that true love is eternal. Here the movie takes on a whole new character as Fei Fei, her little rabbit and her annoying eight-year-old ‘stepbrother’ zoom into a cosmic wonderland where Chang’e (voice of Phillipa Soo) appears as a pop diva with a sharp tongue, surrounded by thousands of cute, luminescent, and psychedelic moon creatures. In this alternate universe, Fei Fei and her ‘stepbrother’ learn many important lessons about love, grief and moving on.

There is some very mild slapstick violence in this movie including:

Over the Moon is an animated musical fantasy that weaves traditional Chinese mythology around the story of a young girl overcoming the loss of her mother and accepting that love can expand and include others too. It can be a little confusing at times, especially when there is a big change in the second half of the film and we jump from a beautiful Chinese village to a psychedelic cosmic universe. However, children are likely to enjoy the cute, bright animation, the sweet songs and the positive messages about love and family.

The main messages from this movie are that our hearts can expand to love more people than we thought, and that it is important to let go of grief.