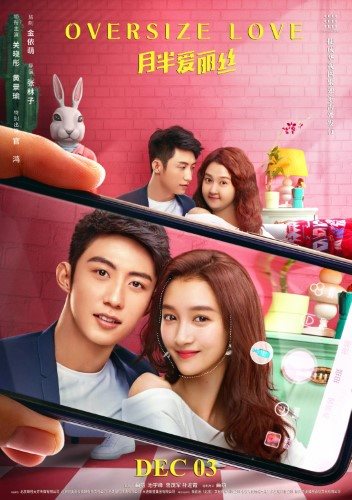 Not suitable under 12; parental guidance to 15 (themes of body shaming and discrimination)

When school bullies tease the young, plump Han Bing, a kind classmate, Lin Xiao Xi comes to his rescue, eating the pile of food they demand Bing to finish. In that moment a bond of friendship is born and the two become inseparable. As adults, the tables have turned. Han Bing (Johnny Huang) has slimmed down and Xiao Xi (Xiaotong Guan) is overweight. She initially seems undaunted by what others think, she dresses as she likes in sweatshirts and large pants and eats as much food as she wants. All the while, Bing’s devotion to her remains unchanged. One day Xiao Xi wishes to have a handsome boyfriend and after a magical encounter with a rabbit her wish appears to come true. A famous musician Huang Ke/Chris (Darren Chen) comes to her photography studio for a photoshoot and Xiao Xi is instantly smitten. Presented with a potion that will keep her slim for 10 hours at a time Xiao Xi’s new look captures the attention of most men including Huang Ke/Chris. Presenting herself as ‘Alice’, she and Huang Ke/Chris begin a relationship, much to the dismay of Bing. When the potion runs out Xiao Xi is given the choice of being slim and beautiful forever or returning to the overweight version of herself. Xiao Xi must decide if fame, beauty and all that goes with it are truly as magical as she once believed them to be or if the promise of love with the one person who has always seen her beauty is really worth risking for the sake of a handsome face who judges people by impossible standards.

Body shaming and discrimination based on weight, inner vs outer beauty, the price paid for standards of physical ‘perfection’ and bullying.

Oversize Love is a light-hearted, romantic film that eventually shows how sometimes the one thing you desire most is something you have had all along. Due to some sketchy and dangerous messages for teens, as well as the film being in Mandarin with English subtitles, Oversize Love is best suited to older audiences or mature viewers who speak Mandarin.

The main messages from this movie are that inner beauty is ultimately more powerful than outer beauty; that physical beauty is fleeting; and that the ones who truly love you will see your worth no matter what you weigh.