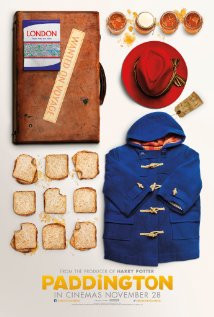 Not suitable under 5; parental guidance to 7 (violence and scary scenes)

Paddington (voiced by Ben Whishaw) is a special bear who loves marmalade sandwiches and lives in deepest darkest Peru with his aunt (Imelda Staunton) and uncle (Michael Gambon). But when an earthquake destroys their home Paddington is forced to relocate to London to try and find a new family to live with.

The Brown family find Paddington alone at Paddington Station and reluctantly let him come home with them. Much to the horror of Mr. Brown (Hugh Bonneville), Mrs. Brown (Sally Hawkins) promises to help Paddington find his explorer friend who might give him a home.

Meanwhile, an evil museum taxidermist named Millicent (Nicole Kidman) finds out about Paddington and starts to hunt him down so she can stuff him and put him in her museum. When Paddington is kidnapped, the Brown family realise their love for the bear and must try to save him.

There is mild sexual activity in this movie, including:

There is some coarse language in this movie that children may imitate, including:

Paddington, based on the well-known children’s books by Michael Bond, is a funny and heart-warming film about being kind to strangers and learning that it is okay to be different. It is ideal for children over the age of seven. Despite the G rating, it is not recommended for under fives, and parental guidance is recommended for children aged five to seven, because of the violent and scary elements of the film. Our reviewer reports that a number of young children were scared at the preview she attended.

The film also gives parents an opportunity to discuss how animals should be treated and the real-life consequences of poaching.