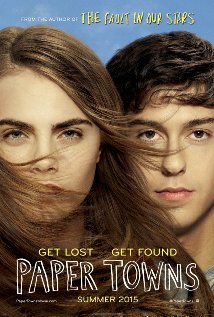 Paper Towns is a romantic drama based on the young-adult novel of the same name. It follows the story of Quentin Jacobson (Nat Wolff), a shy and conscientious student who is a romantic at heart. He has had a long-term crush on his beautiful and popular neighbour, Margo Roth Spiegelman (Cara Delevingne), who used to climb through his bedroom window at night when they were both children.

One night, Margot appears again and asks Quentin to take her around the neighbourhood to carry out revenge upon people who have betrayed her, including her cheating boyfriend (Griffin Freeman). Over the course of their brief journey, Quentin falls more and more in love with Margo’s independence and doggedness.

The following day, people discover that Margo has disappeared. Quentin becomes hell-bent on finding out where she went and what happened, particularly after he discovers what appear to be clues that she left behind. However, as his quest turns gradually into an obsession, Quentin learns a valuable lesson about idealising people that he doesn’t really know, and taking those who are close to him for granted.

There is minimal violence within the film. The film contains a brief depiction of a corpse – it is not graphic and there is very little blood.

Paper Towns is a touching and inspiring film based on a novel by John Green. It focuses on the story of Quentin, as he searches for his missing neighbour Margo with whom who he has long been in love. The movie shows how placing others on a pedestal often results in disappointment. Quentin views Margo as the perfect girl but he soon discovers that she has a troubled past and is merely human like himself. The film highlights the need to view people as complex individuals, and to not box them into stereotypes. The film also demonstrates the importance of friendships in keeping one grounded, as well as the value of being prepared to take risks and venture outside one’s comfort zone.

There is very little in the movie to disturb young children but the story and themes make it more suited to older teens. Parents may be concerned about scenes of teens involved in conversations about sex, alcohol drinking and coarse language.