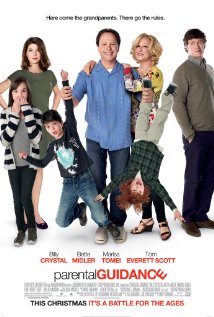 Not recommended under 8, PG to13 (Violence, disturbing scenes)

Dianne (Bette Midler) and Artie (Billy Crystal) have become estranged from their only daughter Alice (Marissa Tomei) and their three grandchildren, Harper (Bailee Madison), Turner (Joshua Rush) and Barker (Kyle Harrison Breitkopf). Alice and Phil (Tom Everett Scott) have very different views about parenting from their own parents and usually keep them at a distance to prevent them having an influence on their children. It is with great reluctance therefore, that they ask them to babysit while they go away for work.

Dianne is determined to make a good impression to stop herself and Artie being seen as ‘the other grandparents’, but their much more relaxed and ‘laissez-faire’ style of parenting predictably causes much mayhem.

Parental Guidance is a family comedy with some crude humour, violence, including bullying, that might be imitated and lax parenting by grandparents. As such it is more suited to older children and adults.

The main messages from this movie are that family is important and you should accept differences of opinion.