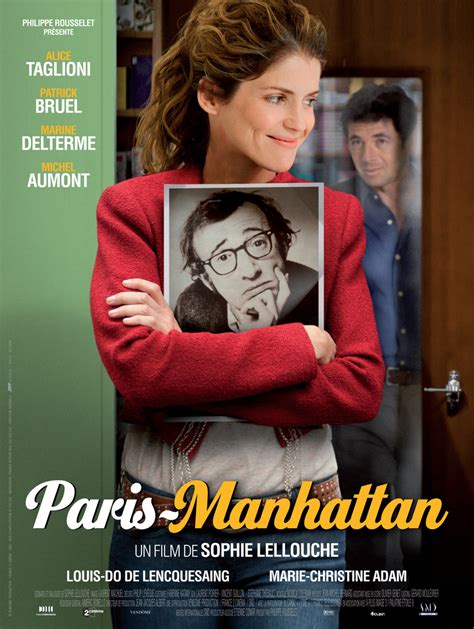 Not recommended under 13, Parental Guidance to 15 (Lacks interest for younger viewers; adult themes;in French with subtitles)).

Alice (Alice Taglioni) is a beautiful and intelligent young woman, but unlucky in love. She is obsessed with Woody Allen whose poster hangs on a wall in her bedroom and to which she often looks for advice. As a younger girl, Alice met Pierre (Louis-Do de Lencquesaing) at a party but when she introduced him to her lovely older sister, Helene (Marine Delterme), a successful lawyer, Pierre immediately fell for and married her.

Alice’s father (Michel Aumont) is very concerned for his daughter and is often trying to find a husband for her, handing out her business cards to any would be suitor. He also passes on to her his pharmacy store which he has owned for many years. Victor (Patrick Bruel) is a potential suitor that Alice’s father sends to the store to install a security alarm. Victor is a little older than Alice but they find they have a lot in common. Meanwhile, Pierre has also introduced Alice to Vincent (Yannick Soulier) an old friend of his and someone Alice finds very attractive. It becomes a competition between the two men to see which one will win over Alice.

Nothing apart from the above-mentioned violent scenes.

Nothing apart from the above-mentioned violent scenes.

When Helene takes Pierre from Alice, Alice is very angry and talks about killing her, drowning her and committing suicide. This may concern some children

Paris Manhattan is a French romantic comedy inspired by Woody Allen (who makes an appearance at the end). It is quite funny and bizarre in places and, as such, is aimed at a more mature audience and older teenagers.

The main messages from this movie are not to take life too seriously and that most seemingly normal families have their problems.