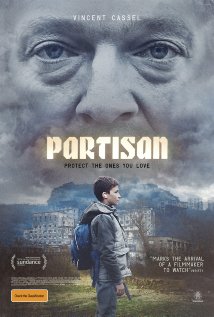 Not suitable under 15, disturbing themes, scenes and violence.

Eleven year old Alexander (Jeremy Chabriel) lives in a secluded compound on the outskirts of a bombed-out town somewhere in Eastern Europe. The compound was built from dilapidated buildings by his Father Gregori (Vincent Cassel) where he lives with Alexander’s Mother Susanna (Florence Mazarra) and seven other women and their children. Gregori is a charismatic head of the household who outwardly loves his children, but in a very controlling way. It is obvious however, that no one dares to oppose Gregori as his temper simmers just below the surface and explodes on occasions.

In order to provide for his family, Gregori trains the older children to shoot with pistols and then sends them out into the town to kill people on a hit list. Alexander does this on several occasions unquestioningly. When a new woman and her son Leo (Alex Balaganskiy) and baby arrive at the compound things start to change. Leo is not a submissive boy and contradicts Gregori too often. Leo and his Mother disappear one night and Alexander realizes that Gregori is lying about what happened to them. This makes him start to question all he’s been brought up to believe in with chilling consequences.

Partisan is a dark movie, which holds a morbidly fascinating insight into life in a cult. It provides quite a realistic portrayal of existence in a broken down society that greatly contrasts with the innocence of the children in the movie. Its pace is quite slow which makes the sudden acts of violence more shocking. Due to the content of the movie, it is not recommended to children under 15.

The main message from this movie is to look after your own.

This movie could also give parents the opportunity to discuss with their teenagers, attitudes and behaviours, and their real-life consequences, such as.