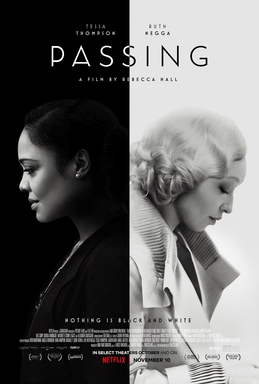 Not suitable under 10; parental guidance to 12 (mature themes (racism, segregation, violence against minorities) and likely lack of interest)

Clare (Ruth Negga) and Irene (Tessa Thompson) – both of mixed racial background – went to school together in Chicago and then went their separate ways. Over a decade later, in the late 1920s, they have a chance encounter in New York, where Irene is now married to African American doctor Brian (André Holland). Clare on the other hand has decided to ‘pass’ as a white woman, and has taken it so far as to keeping her African American ancestry secret from her white and racist husband John (Alexander Skarsgård). While Clare enjoys the advantages and comforts of passing as white, she feels an increasing urge to reconnect with her roots, and starts to spend more and more time with Irene, who is actively involved in the ‘Negro Welfare League’. Tensions start to arise as social butterfly Clare turns heads in Irene’s circles – including Brian’s – and as she is taking more risks to be found out by her prejudiced husband.

Passing is a movie based on Nella Larsen’s 1929 novella of the same title, and is shot entirely in black and white, as a stylistic tool to accentuate and at the same time blur the differences in skin tone. Even though the story is set nearly 100 years ago in the United States, the themes of racism and searching for identity and its place in society are current and as relevant as ever. Its subtle style, calm pace, and cinematographic aesthetics will most likely appeal to a mature audience. Mature themes, such as implied violence against minorities, make the movie unsuitable for young children and warrants parental guidance for children under 13.

The main messages from this movie are that you can never entirely turn your back on your past and cultural heritage; and that money and comfort do not automatically lead to happiness.