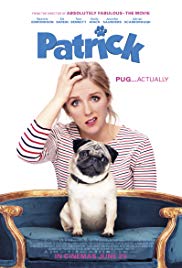 Not recommended under 5; parental guidance recommended to 8 (lacks interest for younger viewers and contains some violence)

Patrick is a loveable but mischievous pug dog who is bequeathed to Sarah (Beattie Edmondson) by her Grandmother when she dies. Sarah is not a dog lover and has enough troubles with relationships without the responsibility of having to care for a dog. In addition, Sarah lives in a flat with a strict ‘no pet policy’ and she is about to start a new job as an English teacher at a comprehensive school. Nonetheless, she takes on Patrick as a duty to her loved Grandmother until she can find a home for him. Patrick inevitably turns Sarah’s life upside down but proves himself useful while out on walks by introducing her to the owners of other dogs.

Firstly Sarah meets a handsome vet (Ed Skrein) to whom she is instantly attracted, but she discovers he is vain and self-centred. Then she meets Ben (Tom Bennett) but discovers that he is the married parent of one of her students, Vicky (Emilia Jones). Vicky has been having some troubles at home, which have affected her schoolwork. Sarah discovers that Vicky’s mother is leaving with a new boyfriend and that has been really upsetting for Vicky. It does mean, however, that Ben is now a free man. Sarah finds herself juggling her new work and relationships while Patrick works his way into her heart.

Social drinking at various events: in a bar; with dinner at a restaurant, and at home.

Patrick is a romantic comedy that calls on slapstick humour for its laughs. It is light hearted, with no great depth of story, but Patrick will endear himself to most viewers. It is is likely to be most popular with older children and adolescents.

The main messages from this movie are that what initially appears a bad thing can often turn out to be a good thing and that pets can enrich your life.