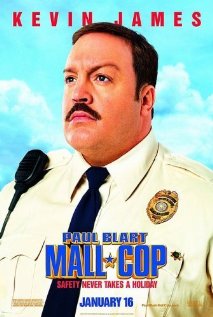 Not recommended under 10, PG to 13 due to frequent violence, coarse language and scenes of alcohol abuse

Paul Blart (Kevin James) is a likable security guard at the West Orange Pavilion Mall who patrols the mall on his Segway scooter assisting and directing shoppers. He has worked in the mall for 10 years after failing to get into the police force because of his hypoglycaemia. Paul is a single parent, who lives at home with his mother (Shirley Knight) and daughter Maya (Raini Rodriguez).
While patrolling the mall Paul passes a little kiosk in the middle of the mall and is immediately attracted to the owner, a young woman named Amy (Jayma Mays). Their first date turns into a disaster when Paul, unaccustomed to alcohol, becomes drunk. From then on he is determined to get back into her good books.
A new trainee security guard, Veck Sims (Keir O’Donnell) arrives, and Paul takes the new man under his wing, not realising that he is really a criminal. When Amy and Maya are taken hostage by armed criminals, led by Veck, who are robbing the mall, Paul is given a chance to prove his real worth.

Many of the frequent violent acts and instances of accidental harm depicted in this film are slapstick. There are occasions when the violence takes on a more intimidating and harmful nature. There are also some behaviours which might be imitated by children. Examples of violence include:

Apart from the above mentioned violent scenes, it is unlikely that there is other content in this movie that is likely to scare or disturb children aged eight to thirteen.

There is some product placement in this movie, including:

There is some occasional mild coarse language and put downs in this movie. Examples include:

Paul Blart - Mall Cop is a slapstick comedy that is likely to appeal to children over ten and adolescents who will be able to identify with the film’s underdog hero. Adults looking for a light-hearted laugh are also likely to enjoy and be entertained by this film.

The main message from this movie is that true courage and heroic action come from a stout heart and a clever mind rather than a handsome appearance and a body full of muscles.
Values in this movie that parents may wish to reinforce with their children include:

Parents may wish to discuss the real life consequences of