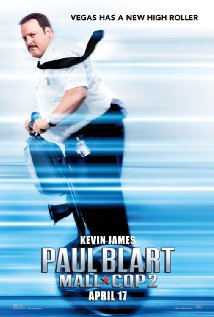 Paul Blart: Mall Cop 2 is an action comedy that continues the story of Paul Blart (Kevin James), a security guard who has been struggling after the end of his marriage and the death of his mother. Paul travels with his daughter Maya (Raini Rodriguez) to Las Vegas for a security convention held at a very up-market casino. He has high hopes that he will finally receive some recognition for work he did at a New Jersey mall six years previously (the story told in the first film of the series).

Paul finds himself increasingly disappointed as he realises that that the convention is in fact not about celebrating his small-time victory in Jersey. While dealing with this blow to his ego, he also finds himself becoming entangled in a heist.  A group of international art thieves intend to steal invaluable items from the casino, including one of Van Gogh’s most famous works.

Although the general manager and head of security at the casino initially look down on him, Paul hopes that his accidental involvement with the thieves will enable him to redeem himself.

There is limited violence within the film, including:

Children this age are likely to find the thieves, and the violence described above, scary.

Some children in this age group may also find the violence and thieves scary.

There are mild sexual references in the film, including:

Paul Blart: Mall Cop 2, the second film in this series, is a comedy about a hard-working underdog looking for the recognition he deserves. The movie makes the point that awards and accolades are insignificant in comparison to genuinely loving what you do, but also demonstrates the very human desire to want validation and respect from one’s peers. The film also displays a compassionate relationship between Paul and his teenage daughter, highlighting the difficulties parents may face in regard to balancing care with overprotection.

There is some violence in the film and the themes are more likely to be understood by children aged 12 and over. Parental guidance is recommended for younger viewers.