Paw Patrol: Jet to the Rescue 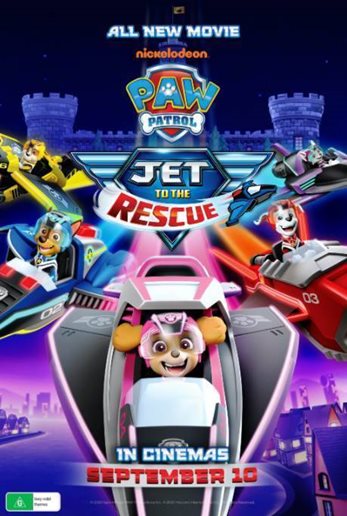 Parental guidance to 3 (mild themes and scenes). May lack interest over 7.

When Ryder and the pups are invited to Barkingburg Castle for the Princess’ birthday they are excited to meet her and give her a surprise gift but all eyes are on the precious Gem of Barkingburg that had been bequeathed to the Princess earlier in the evening. The Duke of Flappington, who claims to be a distant cousin, is welcomed to the party but he soon shows his true intentions by conspiring with the selfish pup Sweetie to steal the gem for himself. Trying to thwart the theft, Ryder and most of the pups find themselves prisoners in a remote storage chamber deep within the Castle. Skye and two others manage to avoid being captured but are locked outside and unable to contact Ryder. Meanwhile, the Duke is using the gem to create a magic sceptre of sorts to make his own kingdom in the clouds. It is up to Skye, Ryder and the rest of the pups to save the Princess and all of Barkingburg before it is too late.

Selfishness and greed; Facing your fears; Good versus evil.

Paw Patrol: Jet to the Rescue is an animated adventure aimed a preschool audience. The plot and dialogue are predictable and repetitive but the young viewers at which it is aimed will enjoy the characters and their quest to help everyone they encounter.

The main messages from this movie are to always show kindness to others and to always believe in yourself.