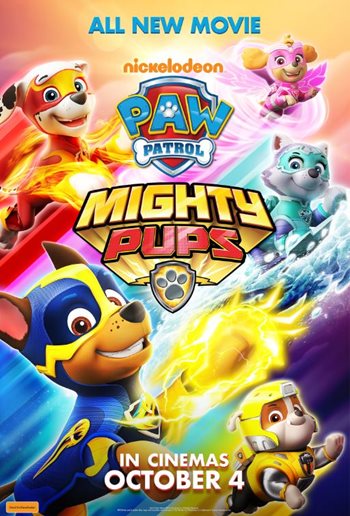 Suitable for all ages but lacks interest over 7

A team of six helpful pups, together with their young mentor Ryder (Justin Kelley), try to serve and protect their town. When a rocket ship knocks a meteor off course and sends it blasting through the atmosphere straight for Adventure Bay, the pups are the first on the scene and find themselves with individual super-powers curtesy of the cosmic rock. These super powers are soon put to work when the villainous Mayor Humdinger (Ron Pardo) joins forces with his naughty nephew Harold (Chance Hurstfield), who was also close enough to have gained supernatural abilities from the rock, to steal the meteor from the town hall and use it for his own personal gain. The pups must work together to stop the pair before they inadvertently destroy the town.

Apart from the violent scenes described above, children under the age of 5 are unlikely to be scared by anything in this film

The movie itself contains no product placement but parents should be aware that the film is an off shoot of the Might Pups TV series and that there are entire lines of merchandise based on the characters portrayed.

Mighty Pups: Paw Patrol is an animated adventure aimed at preschoolers. The plot is very predictable and will generally not appeal to older audiences.

The main messages from this movie are to believe in yourself and never stop trying. It also illustrates the fact that everyone has a role to play and that by working together seemingly impossible obstacles can be overcome.