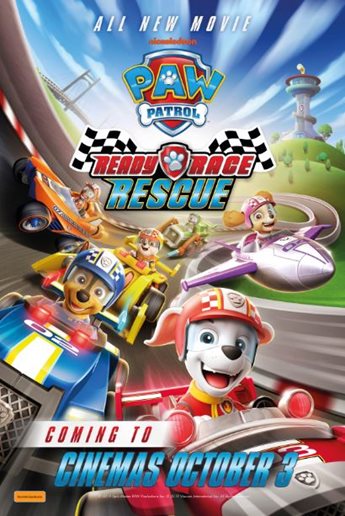 Parental guidance to 4 (mild themes). May lack interest over 6.

All the Paw Patrol pups, especially Marshall, are very excited when a car race featuring The Whoosh comes to Adventure Bay. The pups are cheering for The Whoosh to win but Mayor Humdinger’s cousin, the cheating Cheetah, has other plans. Determined to win the trophy by any means possible the Cheetah stoops to all kinds of dirty tricks to ensure she wins the race. After The Whoosh injures his elbow, Marshall steps in to drive on his behalf but he is no match for the Cheetah’s tricks. When a tie is declared and a new race set, despite feeling inadequate, Marshall again agrees to drive for The Whoosh but the Cheetah and Mayor Humdinger will stop at nothing to come in first. When The Whoosh is abducted and the other race cars stolen it is up to the pups to save the day and for Marshall to prove you do not need to cheat in order to win.

Paw Patrol: Ready, Race, Rescue is a colourful, animated adventure featuring characters from the popular television series Paw Patrol. The plot is very predictable and the movie will be largely enjoyed by young audiences.

The main messages from this movie are to believe in yourself, to keep trying and to help others whenever you can.