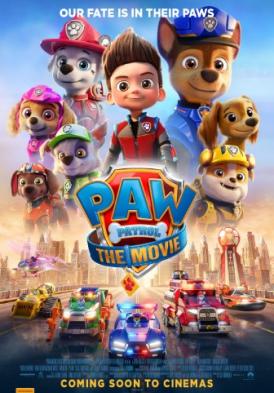 The PAW Patrol is on a roll again! Human boy, Ryder (Will Brisbin), and his team of talking pup heroes, Chase (Iain Armitage), Marshall (Kingsley Marshall), Rubble (Keegan Hedley), Rocky (Callum Shoniker), Zuma (Shayle Simons), and Skye (Lilly Bartlam), are called to the rescue as a new Mayor – selfish and eccentric dog hater and cat lover, Humdinger (Ron Pardo) – causes all sorts of havoc in the neighbouring town of Adventure City. Gladly, the PAW Patrol have new headquarters and flashy gadgets, and also support from savvy, streetwise pup Liberty (Marsai Martin), to tackle the challenges of the big city.

PAW Patrol: The Movie is based on the popular Nickelodeon TV series, aimed at and popular with preschool audiences. While the positive, core messages of teamwork, friendship, courage, and problem-solving are still front and centre, in comparison to the TV series, the movie is much faster, louder, more action-packed, and featuring more serious peril and predicament. This is why the movie is more suitable and appropriate for a slightly older audience than the TV series, and parental guidance is recommended due to scary themes, and in particular, for sensitive children who might feel triggered by themes around trauma or adoption.

The main messages from this movie are that you can achieve more when you work as a team; that it’s important to look out for one another; and that you can move on from past challenges and use them as an opportunity for personal development and growth.