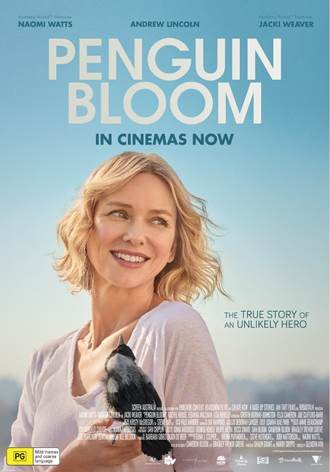 Not suitable under 8; parental guidance to 12 (themes and language)

After a crippling accident in Thailand, Sam Bloom (Naomi Watts) mourns the life she lost and the person she used to be. Her husband Cam (Andrew Lincoln) and sons Noah (Grifffin Murray-Johnston), Reuben (Felix Cameron) and Oli (Abe Clifford-Barr) try to help as much as they can but it doesn’t seem to be enough. Sam is angry and hurting and shuts herself away from the world and, to some extent, from her family. When Noah rescues a baby magpie, the bird – later called Penguin – worms his way into their hearts. Left alone in the house, Penguin and Sam begin to develop a special bond. As Penguin finally manages to fly, he inspires Sam to try something new and she finds fulfilment in learning to kayak. Sam comes to recognise that although things are different, she is still the same person she always was and great things are yet to come.

Loss of identity; Grief; Family tragedy; Loss of a pet; Personal injury; Coming to terms with a new reality.

Penguin Bloom is a heart-warming drama based on the compelling, true story of the Bloom family. The film features a stellar cast and outstanding performances and contains many pertinent messages for this current time in human history. Best suited to older children and adults and all those who appreciate the lessons that can be learned from the triumphs of those who have overcome incredible odds.

The main messages from this movie are that anyone’s life can be changed in an instant, that there are times when we will be scared or angry, grieving or in pain, believing that we lack the strength to get through it but (even in these moments) we are stronger than we think and more loved than we can ever imagine.

This movie could also give parents the opportunity to discuss with their children the importance of communication between family members, not hiding our feelings or blaming ourselves for things that are completely beyond our control.