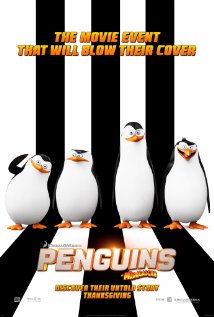 Skipper (voiced by Tom McGrath), Kowalski (Chris Miller), Rico (Conrad Vernon) and Private (Christopher Knights) are penguin spies. One day when they are kidnapped by an evil scientist, they discover that their old zoo mate Dave the Octopus has been kidnapping penguins around the world and is planning to turn them all into monsters. Skipper, Kowalski, Rico and Private must work together with The North Wind, an undercover organisation, to save the penguin population and defeat Dave.

Loss of a parent; separation from family

The film is part of the “Madagascar” franchise, with plenty of associated merchandise

Penguins of Madagascar, which is a spin-off from the Madagascar movies, is an entertaiining action comedy. It is ideal for children over the age of seven. Because of the violence and scary elements of the film, it is not recommended for under fives and parental guidance is recommended for the five to seven age group.

This movie could also give parents the opportunity to discuss with their children the real-life consequences of using violence to solve conflicts.