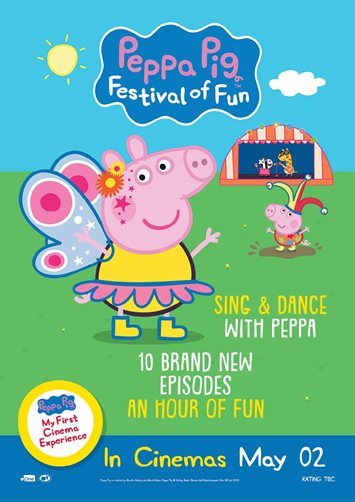 Suitable for all ages.

Peppa Pig: Festival of Fun is a collection of short animated movies including: The Petting Farm; A Visit to the Zoo; Bird Spotting; Super Potato Movie; Pizza! Pizza!; Strawberries; Children’s Festival; Muddy Festival; TV Land; Roman Day and Grandpa Pig’s Birthday.   These are interspersed with live entertainment by a diverse group of young children who continue the theme of the previous short film. The children sing and dance and invite the members of the audience to join in with them. Children will love watching Peppa and George splash in muddy puddles, learn about animals at a petting farm and at the zoo, give Grandpa a fun birthday party and discover how television shows are made.

There is no violence in this movie but some slapstick comedy, such as:

Peppa Pig: Festival of Fun is a series of animated cartoons made specifically for very young children. It is fun and entertaining and young children will enjoy joining in the dancing and movement that the children perform.

The recurrent messages from this movie are the importance of hand washing and the need to eat five serves of fruit and vegetables a day.