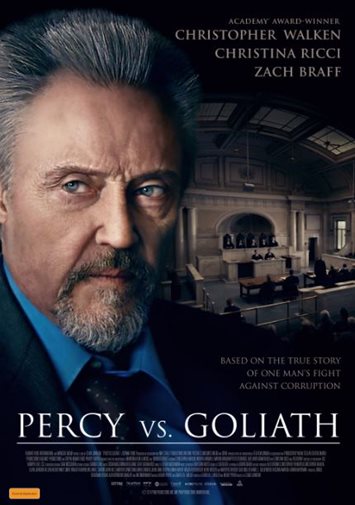 Not suitable under 8; parental guidance to 13 (adult themes; lack of interest)

In 1998, small-town Canadian farmer Percy Schmeiser (Christopher Walken) is accused by agriculture conglomerate Monsanto of illegally using their genetically modified (GMO) canola seeds to grow better crops. As the 70-year-old farmer takes the business to court, with the help of his local lawyer Jackson Weaver (Zach Braff) and environmental activist Rebecca Salcau (Christina Ricci), he becomes an unlikely spokesperson for disenfranchised farmers around the world. His monumental legal battle, that goes all the way to the Supreme Court, ultimately transforms into a challenge to protect both the rights of farmers and the world’s food supply against perceived corporate greed.

Based on a true story, Percy vs Goliath is a down-to-earth legal drama with a thin plot and solid performances from its lead cast. This film is best suited to children over the age of 13 and adults due to the legal content and adult themes related to financial distress and suicide. It will likely lack interest for children under the age of 13.

The main message from this movie is that doing the right and true thing is more important than doing the easy thing.