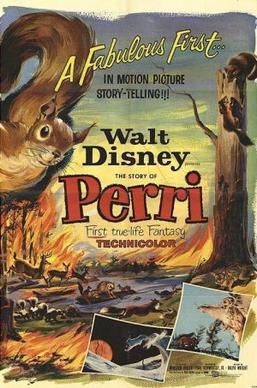 Perri is a young pine squirrel, growing up with her mother, father, and brothers and sisters in a nest in the treetops. It isn't long before Perri learns that life in the forest isn't all bliss and happiness: When a marten discovers their nest, Perri's father bravely directs the marten's attention on himself and falls prey to the predator – and the marten is not the only danger to look out for. There are a lot of things that young Perri needs to learn in order to survive, so that she can have a family of her own one day. The audience follows Perri for one year, maturing from childhood to adulthood. Narrated by Winston Hibler, the viewer gets an entertaining and educating insight into the world of the forest, where pine, ground, and flying squirrels, martens, beavers, skunks, badgers, wild cats, and birds of prey live in agreement with nature's laws, following their instincts and the change of seasons.

Released in 1956, Perri is part of the Disney "True Life Adventures" series. After Disney had been criticised that earlier live action nature films claimed documentary character but were staged in parts, Disney responded by pointing out that Perri was not a documentary, but a "true life fantasy", following a storyline around fictional characters. While there are scary and sad themes and scenes, the narration provides the audience with beautiful guidance in explaining that one animal's death secures the survival of another, and that this is the natural circle of life –unlike much of modern society who take billions of animal's lives not for survival but for gusto and profit, in the most unethical ways. Perri is a great pick for families, equipped with an entertaining storyline, positive messages, a beautiful soundtrack, and a lot of endearing and funny nature scenes.

The main messages from this movie are that, "To everything there is a season, and a time to every purpose under the Heavens" (the film's opening line), and that death is just as much part of nature as life.