Personal History of David Copperfield, The 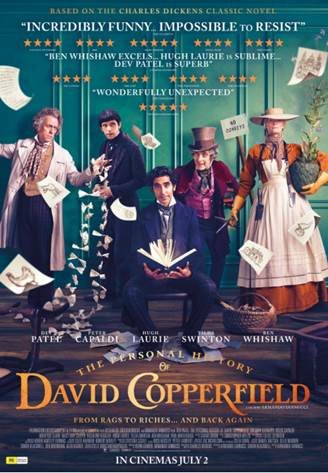 Not suitable under 10; parental guidance to 12 (scary scenes, themes and violence)

This modern version of Dickens' classic tale begins with David Copperfield (Dev Patel) relating his life story to an audience. His father died before he was born and his mother, Clara (Morfydd Clark), brings him up as a young gentleman. The young David's (Ranveer Jaiswal) life is completely overturned when Clara meets and marries a Mr Murdstone (Darren Boyd). Murdstone moves in with his equally cruel and cold sister, Jane (Gwendoline Christie), and David is sent away to stay with the maid, Peggotty (Daisy May Cooper), who lives at Yarmouth in an upside-down boat. When David returns home, his stepfather treats him cruelly for not performing well at his studies and sends him to London to work in Murdstone's bottle making factory.

While in London, David lodges with a Mr Micawber (Peter Capoldi), his wife and five children. Micawber ends up in debtors’ prison and the family is thrown out onto the streets. David's life continues to take a series of twists and turns with rises and steep falls. Micawber and Peggotty both continue to appear throughout David's fascinating life, as well as other characters such as sly Uriah Heep. In the end, David is encouraged to write his story down and thus becomes a writer.

There is little coarse language in this movie, including:

The Personal History of David Copperfield is an abridged version of the Dickens' classic novel. Many of the nasty incidents have been removed which makes it more appropriate for older children and teens. There are several unpleasant characters and 19th century England is certainly grim. The story is also quite complex and is therefore not recommended for children under 10 and parental guidance is recommended for children aged 10 – 12.

The main messages from this movie are that perseverance is rewarded; compassion is a great virtue; and overcoming adversity is an important ability.