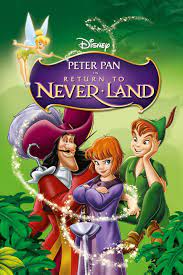 Not suitable under 4; parental guidance to 5 (scary and violent scenes and themes)

Many years have passed since Wendy (voiced by Kath Soucie) was a young girl and first met Peter Pan (voiced by Blayne Weaver) – a boy who can fly and never grows up. Back then, in an amazing adventure, she travelled to Never Land, where she met Peter's fairy friend, Tinker Bell; his companions, the Lost Boys; and also Peter's vindictive archenemy, Captain Hook. Wendy has since grown up, gotten married, and has two children of her own: Jane (voiced by Harriet Owen) and little Daniel. Wendy has never stopped believing in Peter Pan and often tells her children about his adventures. The stories of "faith, trust, and pixie dust" help Wendy to distract Daniel from the terrors of World War II raging over London. Her elder daughter Jane, however, feels like she is too old and does not have time for silly stories. One night, Jane gets really angry with her mother and upsets little Daniel, telling him that Peter Pan is not real and their mother's stories are "childish nonsense". However, even bigger is her shock when, that night, Captain Hook (voiced by Corey Burton) flies his ship to London and kidnaps her – falsely believing that she is Wendy – to use her back in Never Land, as bait to lure Peter Pan into a trap. Peter can outsmart Hook though, and get Jane to safety, but even seeing Peter, Tinker Bell, and the Lost Boys in the flesh, with her own eyes, cannot convince Jane that they are real, instead, she thinks she must be dreaming. Little does she know that her grown-up rationality and doubts have a fatal effect on Tinker Bell, whose light will go out forever unless Jane starts believing in fairies. Without Tinker Bell's pixie dust, Peter is unable to fly and an easy target for Hook. Will Jane be able to make things right, save Tinker Bell and Peter, and make it back home to apologise to Daniel and her mother?

Peter Pan 2: Return to Never Land is the 2002 sequel to the 1953 Disney classic, Peter Pan, and stays true to the original, Disney animation style. The story is set several years after the original, focusing on Wendy's sincere and practical-minded daughter, Jane, who – unlike her mother – has serious doubts about whether Peter Pan and all the fantastic stories around him are real. Like the original, this movie offers families imaginative entertainment and the opportunity to discuss the central themes of faith, trust, and believing in magic. Even though less intense than the original, the movie still contains scary and violent themes, which is why parental guidance for a young audience is recommended.

The main message from this movie is that children should be allowed – and allow themselves! – to be children, and to live out their vivid fantasy and imagination.