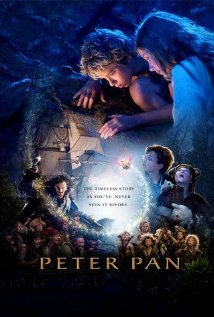 Not suitable under 8; parental guidance to 13 (violence and realistic graphic effects)

This movie is a retelling of J.M. Barrie’s classic story of a young boy who never wants to grow up. Set in early 20th century London, Wendy Darling (Rachel Hurd-Wood) lives with her parents and younger brothers John (Harry Newell) and Michael (Freddie Popplewell, as well as their ‘nanny’, a St. Bernard Dog, complete with headdress. Wendy has a gift for storytelling and enthrals her brothers with fairy stories and tales of pirates. Peter Pan is an unseen visitor at these storytellings, until one day he appears to Wendy and wants to take her back to Neverland. Wendy wants to go but not without her brothers, so Peter Pan (Jeremy Sumpter) teaches the three children to fly and away they go to Neverland, a fantastic place where good and evil are constantly at odds.

Peter Pan introduces Wendy to the Lost Boys, who have no mother, and they immediately want to adopt her as their mother. The Lost Boys build Wendy her own house and they love to listen to Wendy’s stories. The evil on the island is perpetrated by the wicked Captain Hook (Jason Isaacs) and his cutthroat pirates. Pirates have always fascinated Wendy and her brothers and now they are caught up in their own serious, swashbuckling pirate adventure. Captain Hook and Peter Pan are sworn enemies and it was Peter Pan who cut off Hook’s right hand, requiring him to wear his choice of hooks or claws to suit the occasion. Peter Pan has the fairy, Tinkerbell (Ludivine Sagnier), who is quite often a bad fairy, to help him. There are many battles in which Hook and his crew outnumber Peter Pan and friends, but they have magic on their side. At times it seems as if all is lost but good wins in the end and then Wendy and her brothers must decide whether to stay in the magical Neverland or return home to their parents.

There is a lot of violence in this movie, some of it comic, including:

Peter Pan (2003) is a good versus evil battle in which the ‘good’ side wins, though Peter Pan and Tinkerbell can also be quite bad, with Peter Pan being credited with chopping off Hook’s arm and feeding it to the crocodiles. The movie promotes childhood by encouraging fantasy and imagination and the desire to never grow old, and while the story of Peter Pan and Captain Hook has been done many times before, this version includes good graphic effects which make it interesting and exciting to watch. It is well acted and also contains a lot of humour which lightens the darker side of the story and is likely to entertain adults and adolescents. However, due to the violence and realistic graphic effects, this movie is not suitable for children under 8 and parental guidance is recommended to 13.

The main messages from this movie are to encourage and support fantasy and imagination and children’s sense of awe and wonder, while appreciating the duality of ‘good versus evil’.