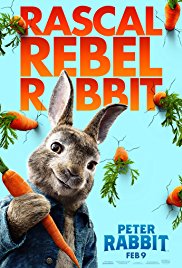 Not suitable under 7; parental guidance to 11 (scary and violent scenes)

Peter Rabbit (voiced by James Corden) and his family Flopsy (Margot Robbie), Mopsy (Elizabeth Debicki), Cotton-Tail (Daisy Ridley), and Benjamin (Colin Moody) spend the days stealing vegetables from Mr McGregor’s (Sam Neill) garden and having fun with their neighbour Bea (Rose Byrne). But one day a new, younger, Mr McGregor (Domhnall Gleeson) moves into town and throws the rabbits’ lives into chaos. Peter and his family must use their resourcefulness to fight for the garden and for Bea’s affections.

Death of a parent; crime; cruelty to animals; allergies and anaphylaxis.

Younger children in this group may be scared or disturbed by some of the above mentioned scenes but there is mostly nothing further of concern.

There is some mention of nudity in this movie, including:

There is some mild coarse language that children might imitate, including:

Peter Rabbit is a beautifully made film based on the books of Beatrix Potter. However, the film is a comedy action adventure that is very different in tone from the kind and friendly books. There is a lot of violence in this version of the story and Peter and his siblings are not great role models for children. Bea, however, is kind and thoughtful and she also stands up for her beliefs.

The film is not recommended for children under the age of 7 and parental guidance is recommended for children aged 7-11. This is because of the scary and violent elements of the film and the scenes of inappropriate behaviour.  The scene in which the rabbits attack someone with berries to which he is severely allergic is particularly concerning, as is Peter’s stated belief that people claim to have allergies that they don’t actually have. This is an issue to discuss with children.

This movie could also give parents the opportunity to discuss with their children whether it was okay that Peter Rabbit was stealing vegetables because as Bea explains “the wildlife belongs to the animals – it was their place first”. Is the position of rabbits different in Australia where they are an introduced species?