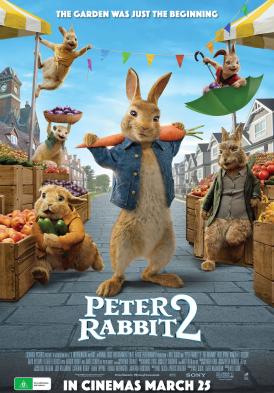 Parental guidance under 5 (violence and themes)

When Bea (Rose Byrne) and Mr McGregor (Domhnall Gleeson) get married, Peter (voice of James Cordon) still harbours some resentment but tries his best to stay in line and help others stick to the rules. However, no matter what happens, Peter seems to be blamed for whatever goes wrong. When Bea’s books become noticed by a fancy publisher, they highlight Peter as the bad seed and, much to Peter’s dismay, everyone seems to think that this is a fine fit. Feeling misunderstood and uncared for, Peter heads off on his own where he meets Barnabas (voice of Lennie James), a street rabbit masquerading as an old friend of his father’s. Peter decides that if everyone thinks he is bad he may as well act like it and he helps Barnabas and his friends raid a family’s kitchen. The street gang is suitably impressed by Peter’s abilities and enlists his help to pull off a really big farmers market heist. In order to make it work, Peter must bring in his family but when things go wrong and Peter’s family is captured his new friends reveal their true colours and Peter must turn to an unlikely source to help set things right.

Being mislabelled and misunderstood; Being exploited; Animal distress; Running away.

Peter Rabbit 2: The Runaway is an animated adventure based on the characters in Beatrix Potter’s beloved children stories. While the plot is predictable the animation is excellent and the film is likely to be enjoyed by its target audience of young children, though parental guidance is recommended for children under 5 due to themes and violence.

The main messages from this movie are that families come in all shapes and sizes and that you should always believe in yourself and in the power of your dreams.