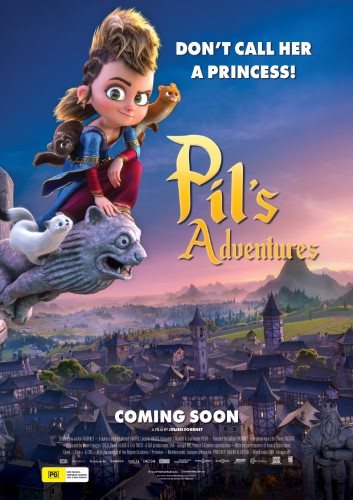 A young orphan called Pil (voice of Eleanor Noble) lives in the top of a tower overlooking a picturesque kingdom. Pil watches the townsfolk below, dreaming of having a family of her own and having friends to play with. In order to survive she must steal food and necessities from the town. She is particularly troublesome to one guard called Graubart (voice of Richard Dumont) who has dubbed her a ‘Sprite’ and will stop at nothing to catch her. When Prince Roland (voice of Scott Humphrey) is finally about to come of age and rule the Kingdom for himself, the evil Lord Tristain (voice of Terrence Scammel), who has been ruling on his behalf, decides to poison the Prince in order to keep power. However, Lord Tristain’s plan backfires when, instead of dying, Roland transforms into a creature (part cat, part chicken). Pil, hiding from Graubart, witnesses the transformation and overhears Tristain's evil plan. Disguising herself as a princess she, Graubart and an inept court jester called Jiggler (voice of Wyatt Bowen) hatch a plan to try to save the Prince and stop Tristain from seizing power.

A child going through life without parents and struggling to survive; Murder; The quest for power; Bullying and ridicule; Loneliness.

Pil’s Adventures is an animated adventure with a fast pace but predictable plot. The film contains a few instances of crude humour, including references to poo and underpants, and is likely to appeal to younger viewers. However, the film is not suitable under 5 and parental guidance is recommended to 8, and it may be difficult for some adults to sit through.

The main messages from this movie are to believe in yourself; to work hard; and to pursue your dreams.