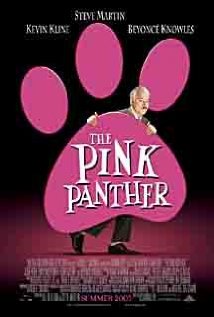 Yves Glaunt, a famous soccer coach, is murdered by a poison dart while celebrating the win by France and his Pink Panther diamond ring is stolen. Chief Inspector Dreyfuss (Kevin Kline), is determined to win the prestigious Medal of Honour, having been nominated seven times previously and been so far unsuccessful. He devises a plot which will help him achieve his great desire, that is to hire the most inept, useless detective in France to officially oversee the case, while Dreyfuss, with his elite team, will work behind the scenes to crack the case. Thus Clouseau (Steve Martin) is brought into the case assisted by the reliable Detective Ponton, (Jean Reno), who has to report back to Dreyfuss. Clouseau is also ably assisted by his beautiful secretary Nicole (Emily Mortimer).

Clouseau has the unfortunate ability to create havoc wherever he goes and remain quite oblivious to it. This gets him into some very dire and funny predicaments. His quest to catch the murderer leads him to America in pursuit of Glaunt’s girlfriend (Beyonce Knowles). In order to blend in, Clouseau has voice training to learn American English, but has trouble doing this and ends up being sent back in shame to France where he’s taken off the case. Clouseau however, has other ideas.

There is a lot of slapstick, cartoon violence, including:

Violent scenes that are not particularly funny include:

The above mentioned violent scenes, particularly the murders of Glaunt and Bizu could disturb very young children.

Most children over the age of eight would be ok to view this movie without parental guidance, depending on the individual child and parents’ assessment of the content.

There is nothing in this movie that would disturb children over thirteen.

McDonalds is featured in the movie.

There is occasional use of the word bastard.

This is a very light film with no real message apart from the fact that it doesn’t pay to be devious.

This movie could give parents the opportunity to point out to their children that the violence in the movie used to comedic effect, would actually hurt in real life. They could also discuss the issues around using sexuality to gain advantage.