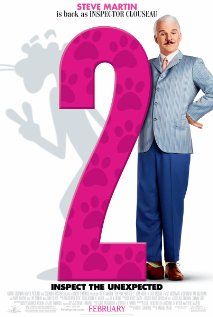 Not recommended under 8, parental guidance recommended 8-13 due to violence and sexual references.

Pink Panther 2 is the sequel to the 2006 remake of the beloved 1960s Pink Panther movie. It reintroduces an array of well known characters and familiar slapstick comedy routines that featured in the first remake.  The well known bungling French detective Inspector Clouseau (Steve Martin) is reinstated to crime solver extraordinaire status by his boss Inspector Dreyfus (Kevin Kline).  However the seemingly charitable move is actually a ploy for Inspector Dreyfus to further his own career with the intent to swoop in and save the day after Inspector Clousea botches the case.
Clouseau has been given the task of solving the high profile murder of a famous soccer coach and recover the missing Pink Panther diamond stolen from his grieving and beautiful fiance, Xania (Beyonce Knowles).  As expected Inspector Clouseau has a number of mishaps and adventures along the way which hamper his crime solving attempts.  Fortunately, the hapless detective has the support of his loyal sidekick Ponton (Jean Reno) and adoring secretary Nicole (Emily Mortimer) who help him through a myriad of fumbles, misinterpretations and mispronunciations.

There is frequent slapstick violence and accidental harm, some of which may be imitated by children. It includes people being hit, dragged behind cars, falling downstairs and running into things with no acknowledgement of consequences or impact that this might cause. Examples of more serious violence include

The above-mentioned violent scenes and scary visual images, could scare or disturb children aged under eight,

There is a high level of sexual innuendo, objectification of women, and sexualised talk and imagery throughout the film including:

Pink Panther 2 features a great array of Hollywood names, but fails to provide many genuine laughs for the audience. Very young children are likely to be disturbed by some scenes, but older children may enjoy the slapstick humour. The main message from this movie is that crime does not pay because the truth will be discovered in the end.
Values in this movie that parents may wish to reinforce with their children include

Parents may also wish to discuss the portrayal of women in the film.