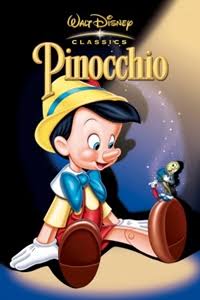 Not suitable under 5; parental guidance to 8 (violent, scary, dark and sad themes and scenes, depiction of delinquent behaviour, alcohol and tobacco consumption)

Woodworker Geppetto (voiced by Christian Rub) is delighted when the Blue Fairy (voiced by Evelyn Venable) grants him his wish, and his masterpiece, a wooden marionette, comes to life. However, before the Blue Fairy can turn Pinocchio (voiced by Dick Jones) into a real boy, he must prove himself brave, truthful and unselfish, and to help him tell right from wrong, she assigns Jiminy Cricket (voiced by Cliff Edwards) as his conscience. Temptations, however, are lurking everywhere, and soon Pinocchio finds himself in serious trouble. Will he actually be able to prove himself worthy to become a real boy?

Pinocchio, first released in 1940, was Disney's second feature length movie after Snow White and Seven Dwarfs. The story gives a lot of food for thought about morals, resisting temptations, doing the right thing, and learning painful lessons. Along with positive messages and role models come a lot of dark and disturbing, sad, scary, violent and mature themes and scenes, that make the film unsuitable for a preschool audience under 5, and parental guidance is recommended for children under 9.

The main messages from this movie are that there might be dire consequences if you decide to do the wrong thing despite knowing better, and that good things come from being brave, truthful and unselfish.