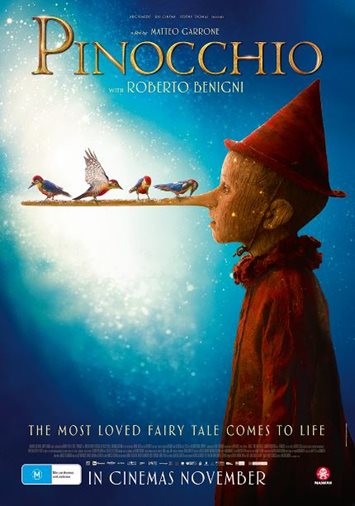 Not suitable under 12; parental guidance to 13 (distressing and frightening scenes)

When a poor carpenter, Geppetto (Roberto Benigni), carves a puppet boy from a magical log, he decides to name the puppet Pinocchio (Frederico Ielapi) and keep him as his son. Pinocchio proves to be a naïve, and sometimes mischievous, child who gets into trouble and faces much peril. On his way to school, Pinocchio stops by a puppet show and is kidnapped by a villainous puppeteer, Mangiafuoco (Gigi Proietti). However, after threatening to use Pinocchio for firewood, Mangiafuoco has a change of heart and lets Pinocchio go, with gold coins to give to Geppetto for his troubles. As Pinocchio begins his journey home he is stopped by two assassins in disguise, a fox (Massimo Ceccherini) and a cat (Rocco Papaleo), who trick Pinocchio into venturing into the woods, where they hang him by his neck from a tree, and steal his gold coins. Pinocchio is saved by a blue-haired fairy (Alida Baldari Calabria) who takes him to some doctors. After he returns to his journey to Geppetto, Pinocchio faces many perils including being swindled of his money, sentenced to life by a judge, shipwrecked on an island, transformed into a donkey, kidnapped by a circus, thrown into the ocean to drown in his donkey-form, and swallowed whole by a sea monster. Finally reunited, Pinocchio helps Geppetto recover from their sea journey and he is eventually transformed into a real boy.

Separation from a parent; Serious illness; Cons and swindles; Children as victims and at risk of harm; Friendship and familial love.

Pinocchio (2020) is a live-action adaption of the classic children’s story which stays true to the original tale’s darkness and moral themes. This film is a much grimmer version than the Disney animated classic, and will likely distress younger viewers due to themes of separation from loved ones, deceitful and malicious characters, and the perilous situations Pinocchio finds himself in. Younger viewers may also find this film slightly long. This film is best suited for older viewers who are likely to appreciate this film as it provides a beautifully made, performed, and adapted classic story with innovative costuming and prosthetic effects. It may be enjoyed by viewers aged 12-13, though parental guidance is recommended for these ages.

The main messages from this movie are that it is important to tell the truth and not to lie; and that if you are kind, respectful, appropriately obedient to your elders, and work hard, you will be rewarded.