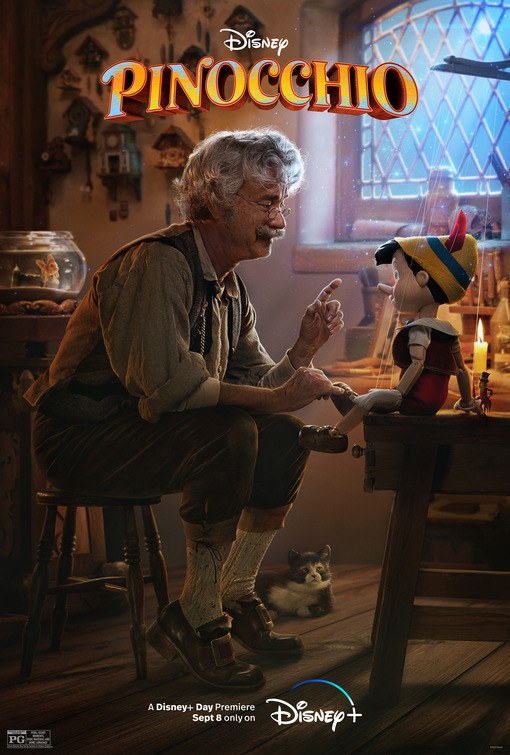 Not suitable under 8; parental guidance to 9 (scary scenes, violence)

Lonely Gepetto (Tom Hanks) carves a wooden puppet, which he calls Pinocchio (voice of Benjamin Evan Ainsworth), and makes a secret wish upon a star before going to bed one night. As he sleeps, a fairy brings Pinocchio to life and when Gepetto awakes he finds he has a wooden boy who looks remarkably like his long lost son. Pinocchio wants nothing more than to be a real boy and to make his father proud. When he is sent to school, Pinocchio meets a couple of dishonest characters who try to convince him that the best way to make his father proud is to become famous. They know just the man who can make this happen and hope to sell Pinocchio to Stromboli (voice of Guiseppe Battison), a cruel showman who steals from his employees and winds up locking Pinocchio in a cage. With the help of Pinocchio’s personal conscience, Jiminy Cricket (voice of Joseph Gordon-Levitt), and marionette Sabina (voice of Jaquita Ta’le), Pinocchio manages to escape and is on his way home when he is tricked and taken to Pleasure Island, where children are turned into donkeys and sent to work in a mine. Luckily, Pinocchio escapes again and finally finds his way home, only to learn that Gepetto isn’t there. He has sold all his priceless possessions to buy a boat to go off in search of Pinocchio. Pinocchio and Jiminy Cricket set off to find Gepetto and just as they are about to reach each other, they are eaten by a sea monster. When things couldn’t possibly look any more bleak, Pinocchio and Gepetto learn a powerful lesson about love and the magic of simple acceptance.

Dishonesty and deceit; Lying; A child separated from his parent; Abduction; Being swayed from what you know is right by the lure of fame and fortune.

Pinocchio (2022) is a live-action (combined with CGI animation), animated musical from Disney. While the original film contained some fairly dark moments, this latest version contains a few scenes which are even more so. Although marketed as a family film, this is not one for younger children and parental guidance is recommended for children aged 8-9.

The main messages from this movie are that it is not about what you look like on the outside but rather who you are in your heart that defines you; that you should be careful who you trust; that lies can really change people; and that one of the most powerful tools to help you through life is having a conscience and choosing to do what is right rather than what is easy or just feels good.