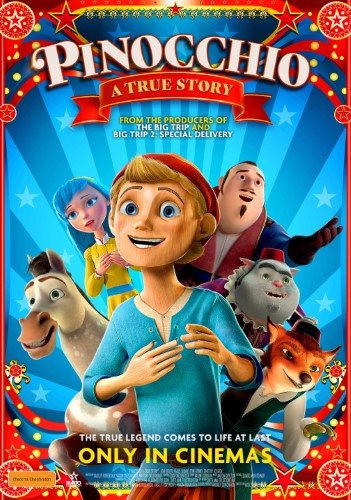 Not suitable under 6; parental guidance to 9 (violence, themes, scary scenes)

When Geppetto (voice of Tom Kenny), a kind hearted woodcarver, creates a wooden boy so he won’t feel lonely, a fairy secretly brings the boy to life as a way of thanking Geppetto for his help. Geppetto names the wooden boy, Pinocchio (voice of Pauly Shore), and calls him his son. They lead a quiet and secluded life in the woods; Pinocchio learns to ride Geppetto’s horse, Tibalt (voice of Jon Heder), and to perform daring stunts in their pasture; and he dreams of going out and seeing the world for himself but is told that the world is not ready to meet him yet. When police officers come snooping around the house looking for thieves that have been robbing townsfolk, Geppetto gets Pinocchio to hide. While Pinocchio and Tibalt are out they come across Bella (voice of Liza Klimova), a young girl in distress. Her horse had been startled and is heading straight for a cliff but Bella, being trapped inside the carriage, is unaware until Pinocchio comes to her aid and saves her life. Bella’s father, Mr. Mangiafuoco (voice of Bernard Jacobsen), owns a circus and invites Pinocchio to join them in their travels and promises to make him a star. Reluctantly, Geppetto lets Pinocchio and Tibalt go with the promise that they will return soon but Mr. Mangiafuoco has other plans and is determined to capitalise on Pinocchio’s talent, no matter what the cost.

Crime; Dispersion of family; The price of fame; Deceit and betrayal.

Pinocchio: A True Story is an animated, musical adventure. While the film has vibrant graphics, it also has a predictable plot and a cumbersome dialogue that adults and older children may find difficult to endure. The film will most likely be enjoyed by younger children (with parental guidance from 6-9) or general fans of the Pinocchio tale.

The main messages from this movie are that there are no obstacles you cannot overcome; and that the magic to transform our lives will always come from within.