Pirates of the Caribbean: At World’s End 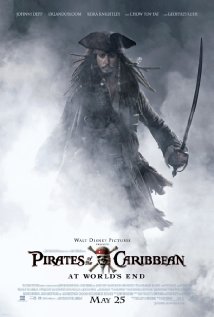 Not recommended under 13, PG to 15: Violence, scary scenes, supernatural themes

The film opens with the hanging of hundreds of citizens, including a small boy, for the crime of aiding pirates. The man responsible for the hangings is Lord Beckett (Tom Hollander), head of the East India Trading Company who has enlisted Davy Jones to rid the oceans of all pirates and any opposition to himself.
The story then travels to Hong Kong where Elizabeth Swan (Keira Knightley), Will Turner (Orlando Bloom), Captain Barbossa (Geoffrey Rush) and Tia Dalma (Naomie Harris) are attempting to gain an audience with the Chinese pirate lord Captain Sao Feng (Yun-Fat). Sao Feng holds an ancient map that will lead Swan and co to the underworld of Davy Jones’s locker, where they hope to find Captain Jack Sparrow and return him back to the land of the living. Captain Jack’s presence is required for a gathering of the Nine Lords of the Brethren Court (the world’s most formidable pirates). Only if the nine join forces can they hope to overthrow Lord Beckett.
The band of rescuers make their way to Davy Jones’s Locker, find captain Jack and then return him, themselves and the Black Pearl (Jack’s ship) back to the land of the living., Elizabeth Swan who has now become the leader of the Chinese pirates, Barbossa, Sparrow, and Turner make their way to the meeting of the Brethren Court with Beckett and Jones in close pursuit. At the meeting, Elizabeth is made King of the Pirates and the Brethren Court agree to join forces against Beckett and Jones. When the nine Pirate Lords sail out to challenge Beckett’s armada they find themselves greatly outnumbered. Tia Dalma reveals that she is really the Storm Goddess Calypso imprisoned in a human form by the original Brethren Court, and that she now wants to be freed. The Brethren Court agree to free Calypso in exchange for her help in destroying Beckett and his Armada. Once freed, she creates a giant whirlpool which becomes the battleground for Jack’s ship the Black Pearl and Jones’s ship the Flying Dutchman.
After a number of fierce battles and confusing plot twists, life returns to normal.

The movie contains intense sequences of stylised violence which is often brutal. Examples include:

In addition to the above-mentioned violent scenes, there are some scenes in this movie that could scare/disturb and possibly traumatise children under the age of five, including the following:

Many of the images listed above are capable of scaring children under the age of eight.

As well as the violence described above, many of the images listed as being capable scaring children under the age of eight years are capable of disturbing or scaring children between the ages of eight and thirteen years. Of most concern are:

There is some occasional mild coarse language in this movie, including “bloody”and “hell” and numerous pirate expressions such as “Slap me thrice and hand me to mumma.”

Pirates of the Caribbean: At World’s End is a swashbuckling pirate adventure with stylised action, numerous special effects, spectacular scenery and humour that is sure to entertain an older adolescent audience. The film is very long and contains an over-abundance of plots and subplots.

The main messages of the movie include the value of self sacrifice and of banding together to fight for a just cause, and the need for trust and the keeping of secrets.