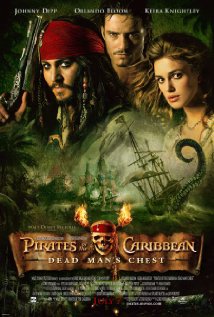 It is Will Turner (Orlando Bloom) and Elizabeth Swan’s (Keira Knightley) wedding day, but before the commencement of the ceremony, Lord Cutler Beckett (Tom Hollander) arrives and arrests the pair for offences committed in the first Pirates of the Caribbean film. The charges against them are a fraud, and to gain their freedom, Will must track down his pirate friend Captain Jack Sparrow (Johnny Depp), and retrieve for Lord Beckett, Jack’s mystical compass. Beckett believes the compass will lead him to the fabled locker of Davy Jones, the Dead Man’s Chest, which he will use to control the shipping trade.

Captain Jack Sparrow is also in pursuit of Davy Jones’s locker for his own reasons. Thirteen years earlier Jack had bargained his soul with the sinister octopus-headed Davy Jones (Bill Nighy) who is also Captain of the ghost ship the Flying Dutchman. Time is up for Jack and Davy Jones is hot on his trail to claim his soul. Jack must try to find is Davy Jones’s locker, which contains the beating heart of Davy Jones, and be in a position to bargain back his soul.

There is intense action violence, and some slapstick violence in this movie with no actual blood and gore. Violent scenes include:

All of the images listed above could also scare or traumatise children between the ages of five and eight years. Of most concern are the images of Davy Jones, his crew of walking dead, the giant octopus, and the more gruesome images of rotting corpses.

While some of the scary visual images listed above may still scare children closer to the age of eight years, the images are designed to be scary and gruesome in a morbidly humorous manner. The images of Davy Jones crew are so over the top as to be laughed at and at times even appear muppet like. Many children closer to the age of thirteen years will correctly interpret the humorous content of the film’s scary visual images and not be scared or threatened as a result. However, parents are encouraged to consider their child’s susceptibility to such themes and images.

Children over the age of thirteen years will be able to correctly interpret the morbidly humorous content of the film’s scary visual images and not be scared or threatened as a result. For some children, parental guidance may still be advisable.

There is a mild and humorous sexual references in which Elizabeth, dressed as a male pirate tells Jack Sparrow “I’m looking for the man I love” to which Jack responds “I’m flattered sir”.

Pirates of the Caribbean: Dead Man’s Chest is a. swashbuckling pirate adventure film tailored to an adolescent audience, and in terms of entertainment is somewhat long winded.

The film offers little in terms of positive values parents may wish to reinforce, although Jack Sparrow, who always presents himself as somewhat of a lovable rogue, and Will, both display admirable selflessness at certain points.

The film to an extent glamourises alcohol consumption through the antics of the rum guzzling pirates and the importance they place on possessing rum. Parents may wish to discuss the real life dangers and consequences of being dependent on alcohol and using it for the purpose of getting drunk.